Anaplastic large cell lymphoma (ALCL) is an aggressive T-cell lymphoma that affects mainly children but also adults. ALCL is further sub-divided into three/four disease entities based on expression of the Anaplastic Lymphoma Kinase (ALK) oncogene and disease location: Systemic ALCL, ALK+ and ALCL, ALK- (the latter being a provisional entity), cutaneous ALCL and implant associated ALCL (iALCL). In ALCL, ALK is expressed as the result of a chromosomal translocation with the t(2;5) being the most common event juxtaposing the oligomerisation domains of NPM1 to the entire intracytoplasmic region of ALK. There are many other ALK translocation partners but these are rare by comparison. The latter two diseases are generally ALK- and whereas systemic ALCL, ALK+ has a relatively good prognosis with a 5-year survival rate approaching 80%, ALK- disease has a far worse outcome (specifically systemic ALCL, ALK-). Disease relapse is common (approximately 30% of systemic ALCL cases) and whilst these patients remain sensitive to chemotherapy, treatment is often limited by its toxic side-effects. However, research discoveries have highlighted a number of novel drugs and targets for the treatment of ALCL, specifically ALCL, ALK+ (Figure 1).

Indeed, ATP-competitive inhibitors of ALK have been shown to induce tumour cell death. The most advanced clinical compound of this class of drugs is Crizotinib, an ALK and c-Met inhibitor that is currently under clinical trial for the treatment of ALCL in the USA, China and Italy (NCT00939770, NCT01606878, NCT02487316, NCT02419287). However, it is known from experience of other ‘kinase inhibitors’ like Crizotinib, that mutant forms of the ALK protein will evolve which are resistant to the inhibitor and hence disease relapse ensues. In this vein, other ALK inhibitors have been designed by many companies and undoubtedly will enter the clinical arena in time. However, it is also possible, that by understanding the mechanisms employed by hyperactive ALK signaling towards transformation and cancer cell survival we will be able to design other drugs that will act synergistically with ALK inhibitors to prevent disease recurrence. 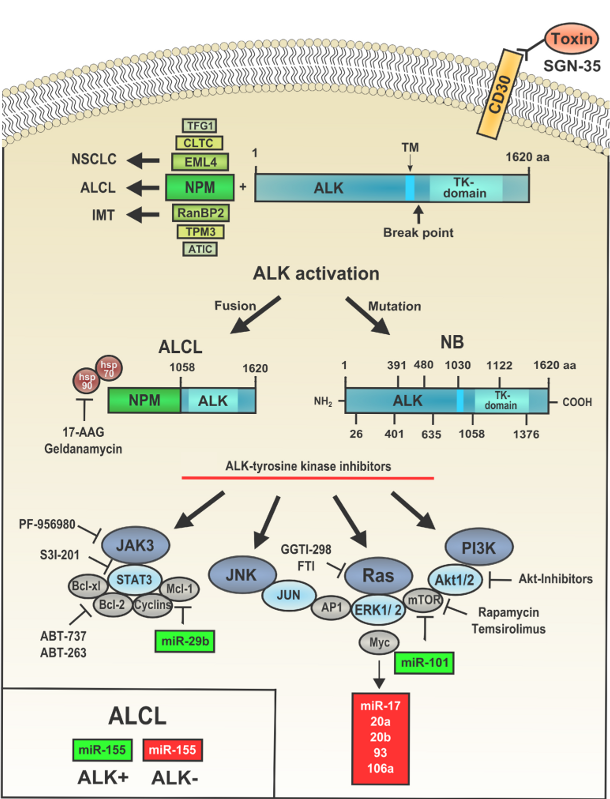 Figure 1: Pathways activated as a result of aberrant ALK expression in ALCL and other ALK-related cancers.

Breast implant-associated Anaplastic Large Cell Lymphoma (BIA-ALCL) is a relatively indolent form of ALCL that develops as a seroma surrounding the breast implant but contained within the fibrous capsule but can also involve the fibrous capsule. The large majority of cases can be cured by implant and capsule removal although a minority of patients develop an aggressive form of this disease that requires intensive chemotherapy and can result in death. All cases of BIA-ALCL that have been reported to date have been associated with the presence of a textured rather than a smooth implant posing questions as to its aetiology. Various hypotheses have been presented ranging from chronic inflammation to bacteria or implant particulates, to carcinogenic toxins on the surface of the implants. Whilst all cases of BIA-ALCL reported so far have been ALK negative, the presence of JAK/STAT mutations suggests similar molecular mechanisms of disease pathogenesis. What is clear is that the number of diagnosed cases is increasing exponentially perhaps due to increased awareness and improved diagnosis.

This website uses cookies to improve your experience while you navigate through the website. Out of these, the cookies that are categorized as necessary are stored on your browser as they are essential for the working of basic functionalities of the website. We also use third-party cookies that help us analyze and understand how you use this website. These cookies will be stored in your browser only with your consent. You also have the option to opt-out of these cookies. But opting out of some of these cookies may affect your browsing experience.
Necessary Always Enabled
Necessary cookies are absolutely essential for the website to function properly. This category only includes cookies that ensures basic functionalities and security features of the website. These cookies do not store any personal information.
Non-necessary
Any cookies that may not be particularly necessary for the website to function and is used specifically to collect user personal data via analytics, ads, other embedded contents are termed as non-necessary cookies. It is mandatory to procure user consent prior to running these cookies on your website.
SAVE & ACCEPT